What our customers say about us

Here's what people are saying about FC CT SOCCER TOURS. 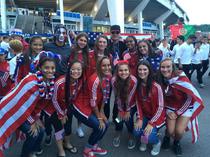 "Where to start on our trip to the 2015 Gothia Cup with FC CT! I am an aunt of two of the players so was on the fringes of it all and was so glad to be welcomed by the coaches, players and parents.  The trip planned was a complete blast and I am sorry to be missing 2016, but will be ready to go in 2017 for sure! In Copenhagen they had a group of busses picking all of us and the mountains of luggage up as soon as we landed and the hotel check in process went very smoothly.  Jon has the group land in Copenhagen a few days prior to official Gothia Cup tournament to get the jet lag out of the kids, which is the best idea yet!  We dropped off our luggage at the hotel and off to the practices or sightseeing we went.  Copenhagen is a gorgeous city and even the rain didn’t keep us from playing soccer or enjoying the city the first day!  They even managed to ensure we had fabulous weather the rest of our stay in Copenhagen and Gothenberg Sweden!!!  The Copenhagen host teams for practice games taught some of the kids their native language and our kids showed them some American things as well.  I know my niece and nephew really enjoyed their interaction in Denmark.  The canal tour and the walk through Copenhagen were fabulous ways to see the city!!  Busses then took us to Gothenberg, Sweden, which was a short couple hour ride and gorgeous country!!  The next hotel was even nicer than the first!  All the site seeing trips were planned to give you enough time to go it on your own or guided tours.  The hotels chosen were fabulous as were the breakfasts provided by the hotels. My son who travelled with me is a classically trained chef so if he doesn’t like the food I hear about it!  Having gotten to know a couple of the coaches who had attended previous years and taking their recommendations for restaurants was even better!

The team of coaches that went were phenomenal!  The kids really respected them and listened to what they were asked to do and were where they needed to be timely.  Many of the coaches took their teams on excursions to see sites after games so the parents could have a little down time to do their own thing, which was above and beyond their duty!  The tournament itself is very well put together, scheduled and well run.  Each stadium has great fields for the teams to play on, facilities, snacks and there is transportation to and from the fields that runs very often during the day.  We had no problems getting to and from the different fields whether it was on a train or a bus and the nice thing was the train and bus drivers spoke English!

If a prospective parent is reading this I highly recommend you let your child participate on this trip."